House of the Dead – Scarlet Dawn 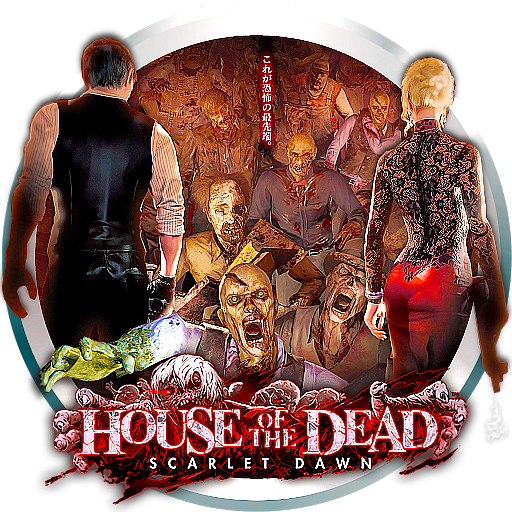 In 2006, three years after the events of The House of the Dead 4, Kate Green joins forces with Ryan Taylor, the brother of her late partner and mentor, James, on an undercover mission in a dinner event within Scarecrow Manor, located in the outskirts of an unnamed state in the New England region of the United States. The manager unleashes his army of mutant creatures upon the dinner guests. Realizing the threat to the world, Kate and Ryan then begin their quest to stop the manager and the outbreak he started.

As they progress through the mansion, they find clues related to the personnel of the DBR Corporation; Dr. Roy Curien, Caleb Goldman, and a mysterious man which Kate identifies as Thornheart, a descendant of the corporation’s founding members, as well as the manager of Scarecrow Manor. Also during their exploration of the mansion, they fight gigantic mutants, such as resurrected creatures from the 1998 Curien Mansion incident, Chariot and Hangedman, as well as a new squid-like creature called the Priestess.

After escaping the crumbling mansion, Kate and Ryan fight their way through the zombies to a nearby church, where they meet Thornheart, who is revealed to be still alive. He reveals himself to be the mastermind of the game’s events, and tells the agents that the corporation’s purpose is to “cleanse” the world of its current status and “reshape” it in their own way. He then sets loose his masterpiece, The Moon, a tree-like behemoth which has abilities similar to that of the Sun from the third game and the World from the fourth, in addition of being able to control wind. They fight it as it gradually became the shape of a humanoid and the size of a 20-story building. Ryan then tries to kill it in a desperate attempt by stabbing an iron rod through its head. This, at first, proves unsuccessful, but then a lightning bolt strikes the rod impaled through The Moon’s head, thus electrocuting and killing it.

The next morning, Kate and Ryan rest as they watch the sun rise while the former recalls James’s motto to never lose hope and keep fighting to the end.

There are four endings, depending on which location the player(s) choose one after the other. Unlike the previous games it does not include the zombified ending.

Note: Do not link directly to torrent/nzb urls will change!

Quick question as I am still somewhat of a n00b. I can get it running outside of Teknoparrot but have no way to quit or control the game.

Is there any way to configure this yet?

is so amazing work for our contributor and to our admin NinjaUK.. thank you guys..

Outside of TeknoParrot there seems to be No way of setting up the controls. I wonder what I am missing?

Game won’t run unless you pay for tecknoparrot on Patreon.  Waste of a download.

techondecks said
Game won’t run unless you pay for tecknoparrot on Patreon.  Waste of a download.

it does mention Patreon – also it wont stay Patreon forever – so hardly a waste – chill winston, its the festive time….

Pay for patron and help keep the scene alive instead of just leaching all the time.

I downloaded the file. I paid the Patreon subscription price. I registered on the Teknoparrot site. How do I get a Patreon key? I keep trying to link the accounts and I get nothing but error messages.

Ted Friend said
I downloaded the file. I paid the Patreon subscription price. I registered on the Teknoparrot site. How do I get a Patreon key? I keep trying to link the accounts and I get nothing but error messages.

I`m too! Server down!

Ted Friend said
I downloaded the file. I paid the Patreon subscription price. I registered on the Teknoparrot site. How do I get a Patreon key? I keep trying to link the accounts and I get nothing but error messages.

Ok i have a solution. Try Microsoft Edge… by me.. it works now but with Firefox i got evertime an Error when i try to connect my Patreon account

Well I messaged Teknogods through Patreon. I asked them to give me a key or refund me. No answer so this morning I cancelled my account. Ten minutes later Teknogods emails me and says my payment never went through and I am not even a member of their Patreon. According to Patreon and my credit card, I was charged $54 on Monday for a year subscription that expires Feb 1, 2023. I have receipts and access to their page on the Patreon app. Screenshots to prove it all. I appreciate the work they do but I’d advise against anyone paying for it. Their community page on Patreon is full of paid subscribers with key issues.

Not work Win 10 , always I run Amdaemon.exe for start the game.. , I have a error, say ” Impossible to found an entry point DnsQueryEx of procedure entry point into the dynamic link library amdaemon.exe i can run the game if I use Hodzero-Win64-Shipping.exe BUT no input key/mouse any way….also for exit I must forced with win procedure. Any help about?
February 1, 2022
1:39 pm

You have to pay for the patreon. Word of warning though, they’re having trouble issuing keys. You might do a $5 donation just to test the waters.

Quick question as I am still somewhat of a n00b. I can get it running outside of Teknoparrot but have no way to quit or control the game.

Is there any way to configure this yet?

You can get a playable version that does not need TP, and you can configure controls with JConfig. Instructions and files links for the HOTD SD and JConfig are here:

Is there a link that isn’t uptobox?