Beavis and Butt-head bring themselves back – hur hur cool buttmunch!

Back in April the world famous Galloping Ghosts Arcade made an announcement,  they had found and restored an original (only 1 of 12 known) Beavis and Butt-head prototype machine. Beavis & Butt-head made waves across American culture, lasting for several years, getting a feature length film and inspiring other shows like South Park. At one point, Atari Games was working on a B&B arcade game that had beat ’em up elements combined with mini-game bonus rounds but after failing the location tests, the game was canned. MTv had one on hand that was donated to them for a charity event but as prototypes go, coming across one in the wild proves to be extremely difficult – if not impossible – Unless, of course, you are Galloping Ghosts Arcade…

The Beavis And Butt-Head Atari game is so rare, in fact, that the location of all 12 cabinets doesn’t appear to be known – except the one we know MTV have and now this one (stamped as #9) it’s possible that a few of them have simply been stashed away in a warehouse somewhere and left to quietly gather dust. But thanks to Galloping Ghost tracking down rare games, one of these prototypes has been hunted down and rescued from oblivion.

For those that missed the LIVE stream last night, we added another LOST Prototype arcade game to the floor! Beavis and…

While trying to get the cabinet to work, the techy types at Galloping Ghost made a strange discovery: the game’s hardware is partly based on the 3DO, Panasonic’s misfiring console from 1993. In order to get Beavis And Butt-Head working again, an old 3DO had to be found and ripped to bits for the relevant parts. 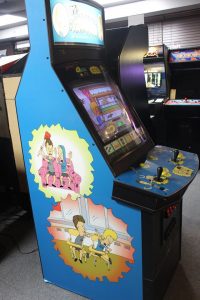 “Taking the drive out and just connecting it to the PCB did not start the drive properly,” the arcade owners wrote on Facebook. “So we put the drive back in the 3DO and let the Power go from the 3DO to the drive and the data cable go to theBeavis And Butt-Head PCB.”

The experiment worked: for the first time in who knows how long, the game was playable again. Having announced the machine’s existence to the world, Beavis And Butt-Head now sits among Galloping Ghosts’ other obscure coin-ops in their Chicago arcade. The game’s strange use of hardware will probably mean that it’ll be too difficult to emulate on an average PC without a lot of coding, but at the very least, this 20-year-old artefact from 1990s pop culture has been given a new lease of life.