Do GPNs Actually Work and How?

In online gaming, nothing is more frustrating than experiencing game latency and watching your character freeze and teleport around, performing actions seconds after you’ve pressed buttons (if you’re still alive). Cheap boss fights and bad MOBA teammates might annoy you, but lag and framerate jittering can seriously trigger gamer rage.

Numerous software exists that claim to specifically address in-game latency, by reducing ping and stabilizing latency fluctuation. These software are known as “GPNs”, or Gamer Private Networks, and while they sound similar to VPNs (virtual private networks), they work rather differently.

In this article we’re going to examine how GPNs technically work, and whether or not they’re worth it. I’m not affiliated with any of the products being mentioned, for the record.

The difference between GPNs and VPNs

A VPN works by encrypting all of the inbound and outbound data to your machine, between you and the target server. VPNs act as a tunnel for your data, which gives you a bit of privacy and can get around IP blocks or geographical restrictions.

However, just because a VPN reroutes your traffic for encryption purposes, doesn’t mean your data is taking optimal routes. In fact, in many cases a VPN can increase your game lag as your data goes through more hops than required.

For example, if you are in the USA and connecting to a VPN in Canada to play Idle Breakout on a server in Belgium, obviously it is not optimal for your traffic to go from the USA to Canada and then Belgium, instead of directly from USA to Belgium.

This is because your ISP may use sub-optimal routes to the game server, which can be a cause of latency while gaming. Even if you have a fairly stable latency, you may experience occasional latency spikes as packets are lost between hops. This is why your snake might “pause” or “freeze” while playing Slither.io on Crazy Games for example, but then you experience “speed up” lag.

So GPN software claims to increase latency stability by improving packet transmission using the most effective routing tables for any particular game the GPN supports.

That last part is important because a GPN is not a “one shoe fits all” solution for all games. The GPN company must actually have dedicated servers for routing your traffic to particular games. For example, if you are connecting to Path of Exile servers located in Texas, the GPN company should have a network of servers with efficient routing between your location and Texas.

What are the most popular GPNs?

These are the GPN companies most frequently mentioned in gaming and tech circles:

For the purpose of testing, I’m going to use WTFast standalone client. They seem to be the most popular and have even partnered with ASUS to include WTFast software in certain ASUS router models.

Testing ping and tracert before GPN

To start the test, I’m going to examine my ping and tracert between my computer and Path of Exile servers in Singapore. Personally I am located in the Philippines, a country with notoriously spotty internet. I have a 10Mbps (bits) connection, and Singapore is about ~1,400 miles away. So in fact, I should be the “ideal candidate” for testing a GPN’s capabilities. 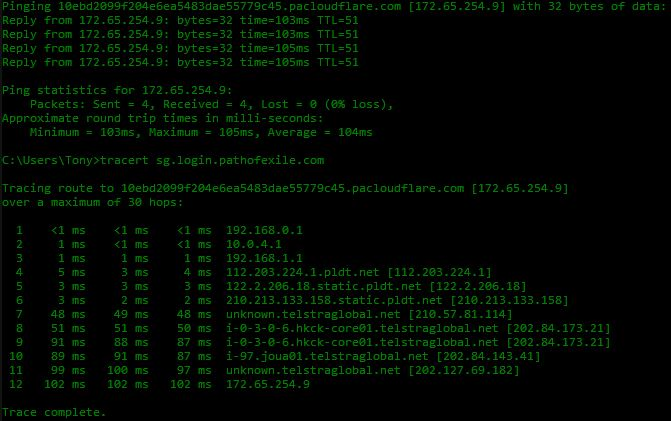 Here we can see that my data gets routed from Philippines to Hong Kong and then Singapore where the game server is located. This is my ISP’s fault, and a clear example of sub-optimal traffic routing.

However, ping and tracert are not the most accurate methods of determining in-game latency. Those commands only gauge the response time of ICMP packets, and not the in-game UDP packets that are typically received from game servers. However, we can still at least see the route our data is taking to its destination.

Testing in-game latency before and after GPN

So the best way to see if a GPN is “effective” is to simply use it and compare before / after results. Of course we need to consider peak times and traffic congestion, but if a GPN is effective, it should be pretty obvious.

Path of Exile latency without GPN

Connecting to the Singapore gateway in PoE, I’ll run around a bit with the in-game latency monitor open and just try to gauge the results by eye. 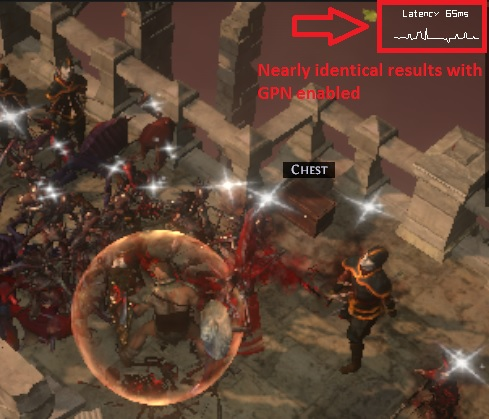 65ms average is actually a great, stable connection for playing a game like Path of Exile, even with my ISP routing traffic from the Philippines to Hong Kong and then Singapore.

Path of Exile latency with GPN

Now I’m going to open WTFast, which claims to have dedicated GPN servers for over 1,000 games, including Path of Exile.

My in-game latency monitor results are practically identical, averaging around 65ms with fluctuations between 48ms – 80ms. 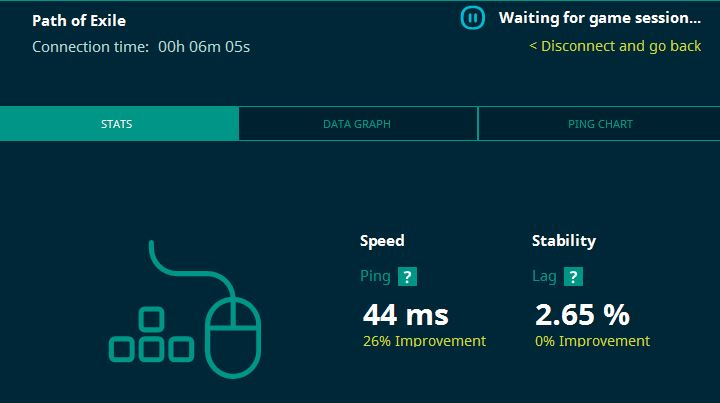 However, WTFast reports that it made a 26% improvement in my ping. The 0% improvement in stability can likely be chalked up to the very short test duration, but overall I just wanted to test whether WTFast made any immediate and noticeable improvement.

Verdict – Is it worth it?

It’s very difficult in my case to determine whether or not a GPN is “worth it”. WTFast seemed to make absolutely no difference in my game latency, however, I seem to already enjoy a relatively good connection despite being routed through Hong Kong.

When it comes to GPNs it seems like “your mileage may vary” and they could be useful in very specific situations, but they aren’t a “one shoe fits all” miracle cure for game lag. If you are experiencing in-game lag, there could be many other reasons besides your data taking “optimal routes” to the game server.

A GPN may be worth investigation if you suffer a lot of online game lag, but I wouldn’t expect anything miraculous.

512gb Dreamcast Image for Self Build Dreamcast Mini from RetroPython