Arcade Blogger recently put up a story that caught my eye, I feel we all have a bit of nostalgia for Ridge Racer….

Released in 1993, there’s no doubting Namco’s Ridge Racer as a true arcade classic. For the first time, gamers could see that arcade graphics were finally getting the visage of realism that they’d been crying out for. This was cutting edge stuff at the time, compared to the bold animated nature of previous driving efforts like Atari’s Pole Position or Sega’s Outrun. I remember thinking that the game was another world away from Atari’s Night Driver, the first arcade game I can remember playing in the 70s. The future had arrived – in spades. 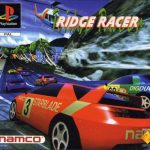 Ridge Racer was the ‘game’ of the original Playstation, it was the first official title and was what got people buying the console, its estimated hundreds of THOUSANDS were sold purely on the back of this game, it was the Mario to Sony… The music, the graphics and the game play were ripe enough to pull people off the Snes and Megadrive/Genesis.

“I first played it when I borrowed it from a friend back in 1996. I was amazed that you could actually skid the cars as I had previously only played games on Master System which with hindsight were pretty basic. In time I just realised that Ridge Racer was a great game with an incredible soundtrack. Best of all it was fast and simple to play. There is little time investment involved to actually pick it up and start getting something out of it.” 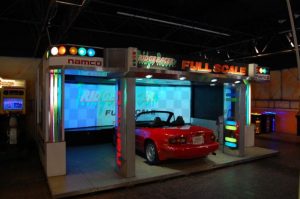 A family holiday to Tunisia introduced Jason to the arcade version of the game. Stumbling across the deluxe version of the Ridge Racer cab gave him an opportunity to transfer his console playing skills to the arcade version. He quickly beat every high score time on the machine. Overtime Jason learnt of Twin Galaxies and world records (like most gamers after watching the King of Kong documentary) . After smashing pretty much every Ridge Racer record to man Jason decided he wanted to play the game on the “Full Scale” machine (you know the one they did as a MX5 with 10ft screens everywhere…)

“I’d never come across a Full Scale machine in my life and I have always wanted to play one. During my record attempts I found out Blackpool Pleasure Beach still had one on its floor. I figured it was kind of like going against the “boss” in a video game. It was the biggest Ridge Racer record I could get my hands on, on the biggest machine that Namco ever made. I guess it was the peak of the mountain regarding my world record journey and a great way to complete the set of records for the game on all of its platforms.”

We think you should go read the full story in depth over at Arcade Blogger.

Yet Another Mini Arcade