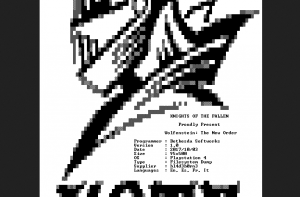 Following on the recent announce that piracy of PS4 titles is now publicly possible on hacked firmware 1.76, a warez group going by the name Knights of The Fallen (KOTF) have started releasing pirated versions of PS4 games on the usual warez channels.

Their releases so far include Knack, Wolfenstein the new order, Far Cry 4, Assassin’s Creed 4, as well as GTA V.

The impact of piracy on the PS4 will be limited for now, as only games requiring firmware 1.76 or below are compatible, and the pirated games will only run on hacked consoles, which themselves have to run firmware 1.76. Launching the games themselves still requires a very involved process which will also contribute to minimize these pirated games from spreading at the moment.

PS4 consoles running firmware 1.76 are hard to find, as it is a firmware from 3 years ago. Sony released PS4 firmware 5.00 this week.

In the meantime, people are wondering if a kernel exploit (ps4 jailbreak) will ever be released for more recent firmwares on the PS4. Kiwidog, a long time member of the PS4 scene, has stated on reddit that he knows of 3 PS4 kernel exploits compatible with firmware 5.00. As is the case often with these kinds of exploits, the ownership of the exploits seems fuzzy and/or it is unclear if any hacker intends to release them.