Pokemon Go is comming to the Sega Dreamcast

Pokemon Go is heading to Sega Dreamcast in a move that few from the world of gaming could have seen coming.

Already something of a phenomenon in 2016, Pokemon Go is currently played by millions using the latest smartphone GPS technology , a version of the game is coming to Dreamcast or, more specifically, the console’s Dreamcast Visual Memory Unit. Despite arriving way back in 1998, the VMU has enjoyed a legacy that goes far beyond that of the failed Sega console, which proved to be the final nail in the coffin of the company known for consoles like the Master System and Mega Drive. 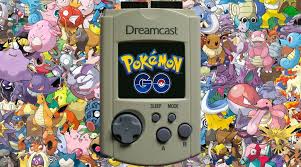 Now better known for developing games, Sega’s decline has not stopped the Dreamcast VMU from developing a cult following online.
Acording to Digital Trends, a version of Pokemon Go is in the works with programmer gaucasaurus_mex developing special maps and other elements for a mini-game inspired by this latest edition of the monster-catching classic.
Fans may have to wait a little longer for the new/old version though, with the updated title unlikely to arrive until early in 2017.

We want to hear about your projects