Years ago as a kid, I was told “get off that Pokemon game and go outside” now many years later I hear myself telling my kids “Time to come home, back inside and get off that Pokemon game” – IF, I was a fan I would actually probably be driving round in the family car finding Pokegyms and whooping some serious ass, but I’m not, for a number of reasons, I’ll go into that more later….

In case you have been living under a rock, the video above shows you what Nintendo has brought you – the game played on smart phones takes you out into the REAL world to catch FICTIONAL characters….I’ll let you watch the video to catch up on more details.

Ive not downloaded this app, I am a big fan of Clash of Clans and over the past couple of years have spent hundreds of hours (and possibly pounds (GBP)) playing and building, to make a clan worth keeping, defending my castles, and attacking others, for NO GOD DAM ACTUAL REAL REASON other for when I take a poo and waste some time…. FUCK THAT GAME!!! – I recently signed my account over to my eldest teenage son (who is also a PokeHunter) and Im no longer tied into any games or apps, IF I were to download Pokemon Go, it would seriously interfere with my grown up – boring – adult life, I work in the day, I work most weekends and some nights after some rare family time I also work into the night, I dont have time to catch one, let alone ‘catch em all’.  I have a job, businesses, real life responsibilities, aint nobody got time to be hunting Pokemon on the streets. 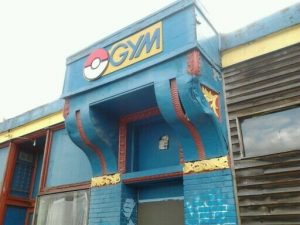 A POKEMON GO ‘HACK’ FOR YOU

Do you live in a city ? EVERYONE is playing it, I cant walk down the High Street without people pointing their phones at buildings, cars, and all types of shit, catching Pokemon – do you live in the countryside ? Now heres where it gets good, due to bad phone signals, no good blanket wi-fi and generally more of the older folk living out ‘in the sticks’ if you stumble across a POKEGYM the chances are you can OWN THAT SHIT there and then and leave a Pokemon to run things – HOW DO I KNOW I HEAR YOU ASK ? Because when driving through the country the other day my 20 year old son asked me to pull over by the village community centre which was a PokeGym and he dropped a Pokemon off and has been benefiting ever since (something to do with high levels in the city and shite int he countryside)….

So enjoy your Pokemon Go until the next craze comes along, no doubt we will start seeing MORE apps doing this whole ‘outside’ thing, such as dating apps (where the money is) – and who knows maybe even ‘adult’ apps, of course when Rockstar create GTA GO , then Im gonna download the shit out of it walking around town blowing up buildings, beating people and stealing cars – a great way to relive my teenage years, virtually!!

Dont get me wrong Nintendo are BACK on top form and dominating the market once again, they’ve gone from console giant, to gaming giant to app giant and with the promise of a new Wii (yuck!) as well as the NES CLASSIC and other hardware in the years to come I dont think the iconic company are going anywhere for a few years yet – what Sega need to do now is step away from the gaming market smash out an app (how about Mario Kart Go – something you play when driving – JOKE!!) and get another console out there (we promise to forgive you for the Saturn!).