The worlds leading gaming community, Twitch, a place where gamers play, broadcast and community-i-fy themselves, and like any community it has SKANKS, girls who are there to tease, or who will do anything for a bit of fame, these girls have no place in ANY society, but none-the-less get some massive publicity for ‘accidentally’ showing something on camera….

Take the recent case of Lea May, who exposed herself on cam, which was not the first time this person has ‘accidentally’ exposed themselves, it was even in the national press, her and loads of other ‘Twitch Girls’ always manage to accidentally expose their body parts, so lets help these poor little things with a few tips and tricks.

Its unlikely that some of these Twitch Skanks will understand these tips, as doing the opposite usually brings you brief fame and thats what its all about for them right? 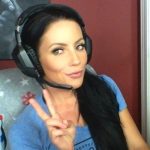 Kaitwan13, another Twitch user, flashed during a live stream and got herself into a spot of bother with her fellow streamers and the show’s host Genietfan as a result. The gamer girl was invited by the show’s host to play the post-apocalyptic game H1Z1 when the incident happened, and almost as soon as the game began, the popular gamer exposed herself causing Genietfan to shout, ‘Kay, what the fuck?!’

Genietfan has reportedly accepted her apology but has also said they can no longer be friends. However, some fans have come to Kaitwan13’s defense.

One replied saying: “Everyone has the right to error. Nobody died… For me it was fun 😀 the magic of live show”

So what do you Arcade Punks think ?