Why Arcade Slot Game is the Bomb

Classic slots were a vital part of the arcade experience back in the dim, distant pre-internet age. Of course, they looked nothing like the games you see online today, with their five reels, multiple pay lines and frankly bewildering array of symbols and prize combos.

Back then it was a simple case of fruits and bells. Three reels, and you needed to line up matching symbols in the middle to win a prize. Those were the days, and unsurprisingly, plenty of developers have jumped on the retro bandwagon and brought out their own 80s-tastic interpretations of those long ago classics.

Here’s the problem with recreating games like these too faithfully, though. They can actually get pretty lame pretty fast. It’s a little like recreating some meal that you loved as a child. It looks and smells amazing and brings the memories flooding back. But a couple of forkfuls is enough to tell you your palate has matured and become a little more sophisticated than when you were 10.

Wazdan is a small-time developer in the slots arena, certainly when compared with the likes of NetEnt and Microgaming. Yet the guys and girls at the company’s HQ in Malta have a habit of coming up with the goods and producing slot games that stand out from the crowd.

Arcade is a simple name for what looks like a simple retro fruit machine game. However, they have done the equivalent of adding a dash of paprika to that mac and cheese, just a little extra spice so that it appeals to 21st century tastes. What’s more, with free no deposit spins bonuses, you are allowed to play this game for free while keeping your chances of winning money alive. 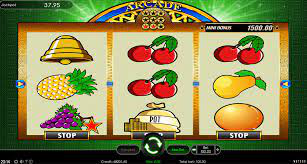 Arcade presents you with the classic three-reel setup. Symbols include bells and all the usual fruits like cherries and plums, plus some more unusual fare including tomatoes and melons. There’s also a Vegas symbol and the Moneybag, which represents the jackpot.

Along the bottom are the standard fields such as auto spin, bet amount, credits and so on. You can bet anything from $0.1 to $100, so this game will satisfy “just for fun” gamers and high rollers alike.

So far so good, but look a little closer and you’ll notice a nine by nine block of stars nestled above the central reel. These represent the nine positions visible on the reels. Some symbols have stars attached to them, and when they appear, they will illuminate the corresponding star on the grid. You will also notice the number increase in the “mini bonus” field above the right reel. Light up all nine, and that bonus amount is there for the taking. All you need to do to make it yours is land a winning pay line.

Another fun extra is the “hold” feature. It brings a flavour of video poker to your slot game, and that can never be a bad thing! You can hold any reel or reels you wish after each spin. The game will automatically hold high value symbols, but you can always override that if you think you know better!

Finally, there’s everyone’s favourite, the gamble. This is available after every win. Either collect or correctly predict red or black to increase your prize. Call it wrong, and you’ll lose it all, though.

Arcade is a high volatility game, so you’ll need to approach it with patience and ideally, a substantial bankroll, as the rewards can be slow to materialize. Stick with it and they will appear, though. One thing is for sure, the 96.62 percent RTP is vastly superior to anything you would have found in a real 1980s arcade!

As for prizes, these range from 2x the stake for two cherries or two raspberries right up to 400x the stake for three moneybags. With a maximum stake of $100, that represents a jackpot payout of up to $40,000, all on a single spin of three reels.

The game operates as smoothly on mobile as it does on desktop. In fact, it adapts perfectly to any type or size of screen, with no effect on the gameplay or the rewards.

Arcade looks like a dozen other retro slots. However, looks can be deceptive. This is a game with hidden depths and the extra features make it fun and rewarding for anyone to play. At the same time, everything is simple to understand, so it’s a good choice for anyone who is new to the world of real money slot games.

Just remember that earlier warning about volatility. Unless you’re a seriously high roller, settle back on the lower stakes and give the game time to come to you. Good luck!

The Dragon Ninja Makes a Comeback on PS4 and PS5