Bounty Hunter has just seen the light of day as recently those guys over at 8ch have managed to dump it – Theres probably a good reason no-one has ever taken the time to dump it though , and you are going to need to ‘create’ some punch blocks on your cab for this bad boy! 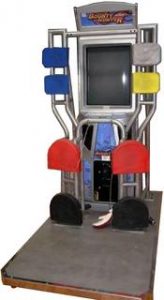 UK Arcades recently ranked this as “Worse than Valve Limit R” – oh and did we mention its a vertical screen (except on load!) – apparently it takes a while to load, but then there is no delay in loading between parts – which according to information on the web, the original cabinet took ages to load too (pasted source below!)

“Bounty Hunter is a game similar to Konami’s Boxing Mania created by the Korean company, GCTech, and it takes the concept a bit further with players not only being able to punch the pads, but also knee and kick the on screen enemy like there’s no tomorrow! Players can choose a bad guy to go after from a selection of 8 — with the popular choice being Osama bin Laden — pick a background from Subway, Construction Site or Back Street, and then get into it with the objective being to punch, knee or kick the pad that corresponds with the on screen targets. As you progress through three opponents with increasing difficulty to finally face off against the boss. Definitely a market there for this one going on the response it received at IAAPA. Quite a fun game, and solidly built too. Uses a VGA 29-inch perfectly flat screen tube which accepts a standard 15-pin VGA cable from a computer, not surprising as the machine actually runs off a 1GHz Pentium III with 768MB of RAM, a 40GB hard drive and a GeForce 2 MX200 AGP graphics card. Bootup time is horrible, about 5 to 10 minutes! Not many were made so quite rare, the company (GCTech) has since gone out of business. The used to be found on the web at www.gctech.co.kr. For a while Topgen re-branded the decals on the cabinet, but the software still wore the GCTech logo and copyright.” source : ARCADE MUSEUM