Since I was a kid games have always entertained me usually from afar, I never had the money to feed coin after coin into the arcades, so I used to watch people playing, until I was a teenager and money was better, our local video store had a machine which changed every few weeks, I remember my excitement and all the money I wasted into the E-Swat machine, I even saved my lunch money all week so I could fill it within an hour at the weekend.

We then moved to an area, which has a free-play arcade, you paid an entrance fee and you got 2 hours play on all the arcade machines, from the latest and greatest to the older stuff, here we played Shinobi – and my god, didnt we play the shit out of this! Me and my brother taking it in turns playing Shinobi, then Street Fighter, then time up, yes the time flew by. The memories created here are still there today, flashbacks into older arcade gaming, remembered fondly.

My adult life, I have collected original arcade machines, converted originals and of course, created ‘multi game’ arcade machines, I have owned every old generation console ever, and chased these highs ever since my younger days, just touching them on the multi gaming cabs, usually when a younger family member has been at my side with the same gleam in my eye that I did back in the day, but Im going to be honest here, playing the ‘classics’ off ratio (widescreen) or on a LCD never really gives it ‘that’ feel – even with all the little programs to make it look authentic, is it because I know its not CRT?

Grab an old console (SNES/MEGADRIVE/GENESIS) play a game for a bit on your modern TV and then pop round your Nans go up to the spare bedroom and use the portable (CRT) and see the difference, does it feel better? OF COURSE IT DOES, there is THAT high from your younger days, warming you up and glowing….

WHAT HAPPENING TO THE CRT? 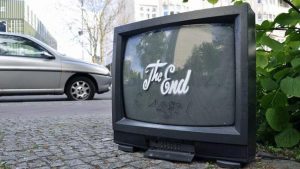 According to a report from Venturebeat, the stock of new 74cm CRT screens has almost been depleted. Dream Arcades, the largest producer of non-coin-operated arcade machines in the world, says that the last company that was producing the displays sold its manufacturing equipment to an unnamed Chinese company that was unable to replicate the required winding procedures.

Dream Arcades currently has less than 30 of the monitors left in stock and once that’s gone, they will no longer be able to perfectly replicate the experience of arcade games like Donkey Kong or Pac-Man as they were originally intended.

There are still THOUSANDS out there up for grabs, but they wont last long – with the arcade scene in its BIGGEST BOOM since the 1980s, they are being snapped up by home builders, restorers and those looking to flip a quick buck.

How to rig a PC power supply to a Jamma Cabinet.