All us Arcade Punks thing about it – “how about I showcase my collections to the public in a cafe/bar?” , but how many of us do it?

Well one man did, Steve Lowe who also has one of the largest private collections of retro computer games in the UK.  Steve decided to open his place of play, errr I mean place of work in the a basement in the High Street of Portsmouth (England,UK).

Steve was torn between opening a museum and putting his collection behind cabinets or making them available for people to play, lucky for his visitors he chose the later.

Steve is keen to bring back the social aspect of playing video games. He explained:

“When I was a kid, we used to go round someone’s house to play but people don’t do that anymore. They are sat at home and they don’t come together as they used to.”

Steve opened the cafe a couple of days ago, just in time for the English half term holidays,  and from what we can see on his FaceBook page has had GREAT feedback!

Arcade Punk spoke exclusively to Steve at Game Over Internet cafe this morning, Steve explained he has much more interest than anticipated,  has already had lots of visitors, especially from the newer generation playing consoles 2 or 3 times older than them!

We asked if he had started to receive visitors from outside the area “its early days at the moment, although as we speak we have 2 lads here who came to visit their gran from Shrewsbury, and have had a few phone calls – so who knows what the next few months brings” 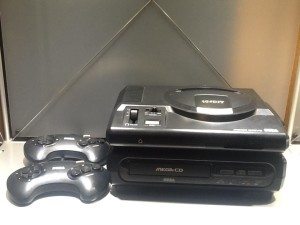 Steve owns practically every console and has some of his collection in the cafe (all are his) – but easily has more for other new cafes….

“The place was a big investment, Ive pulled the money myself, no loans, no kick-starter or any campaigns, its taking 3 years of planning, 6 months of building and I’d happily do it again all over” Steve excitedly proclaims.

We asked what his future plans were, we half expected him to say he was already living the dream, but not Steve, he explained “Im making sure I get this right, then I’d love to help others and open other venues over the country, there are loads more like minded people, loads more collectors and plenty more people to enjoy it – Everyone I have spoken to likes that fact that everything is in one place, Ive had people volunteer to come work for me!”

Ive had people volunteer to come work for me

All the consoles are fed to screens via Capture Cards, meaning you can record your gaming experiences, so much so that Steve told us of a YouTuber who will start making regular gaming videos from the Game Over Cafe. Using the pcs on site people are able to look up old school cheats (or pokes!) and gaming advice and tactical game play – bringing old school gaming up to modern day ‘cheating’.

Skill Based Games wont be taking over the casino.