We’ve been looking for a DECENT Android Box for the Arcade Punks HQ for quite some time now – yes we have a shield, but we want something else, something that can STAY in the HQ and not be taken home by the punks on ‘loan’ regularly – some of the requirements are – good controller, easy navigation, decent app installer (Aside from Google Play) and good specs. Here we introduce you to the T8 V Entertainment Box (version 5 2017 edition).

The thing to remember if you are a Pi retro-gamer is that this will blow you away, but if you are a PC retro-gamer you are not going to be impressed, until you realise that this is NOT a PC and a very different operating system in its entirety and when you ‘droid, there are some decent apps out there that you could end up falling in love with….. 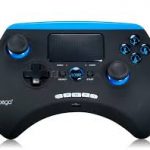 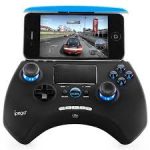 The controller is by far one of the best we have seen provided with any android box set up before and if you dont go out and buy this android box, at least consider purchasing the controller! You can even convert it over to include holding your phone and connecting to that and playing games – (we need to keep a close eye on this at the Arcade Punks HQ)

So we installed a whole host of applications, you can see from the video we used the pre-loaded app installer, which was VERY impressive in comparison to some droid boxes, this one looked pretty, actually worked and we deemed it use-worthy!  One of the applications (already pre-loaded) was the awesome KO GAMEBOX, as well as its own range of media players , we tried out Show Time and it worked a dream, we also installed Kodi (Krypton) and added some add-ons such as the Team ZT addon.

We are more-than-likely going to keep this decent spec Android Box at the HQ, the Shield keeps going off to various Punks for ‘long-term-loans’ and in honesty this is quite an impressive piece of kit – we even tried the new RomFlix on it and it worked flawlessly – but more on that later!

HOW TO: Daphne EmulationStation for Windows