Recently we got hold of a Droidbox Go Projector, a fantastic LED projector not much bigger than an iPhone 7, here we share with you our experience on the beautiful Rose Gold coloured gadget. 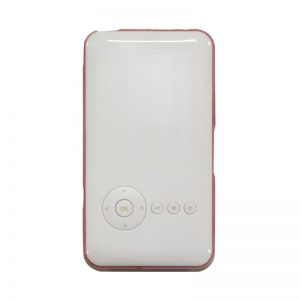 When people say ‘projector’ we instantly thing “oh my god how long will the ‘lamp’ last, how much is a new ‘lamp'” or when mentioning portable LED projectors the first thought is “whats the quality like?”.

Well you dont replace the ‘lamps’ in LED projectors, there are none to replace, and as for quality, in the right environment on the right surface this is up there with the best of them, its perfect HD quality and even has its own built in speaker, but what makes this better than any other projector out there is it has a FULL ANDROID operating system already built in which you can control with the supplied remote or even link up your Android Phone!

So what do you get?

Well you get some fantastic packaging, it really does make it look ‘plush’, inside the box you get a power adaptor, remote control, various leads, a ‘snake’ stand (which is rather good!) and of course the sexy looking Rose Gold projector unit itself.

Once you switch on (be warned there are a couple of seconds delay whilst the projector kicks in), you need to enter your wi-fi password and then you have a choice of 2 front ends, both which do exactly the same thing and offer you the same applications – just with different interfaces. 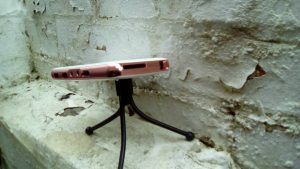 The unit is equipped with a HDMI input, which allows you to plug in any HDMI devices, you do need to select HDMI Input in the operating system for this to activate, but when it does it opens up the possibility to plug in games consoles, PCs, and any other device with a HDMI output.

We set this up outside on a dark night, pointed it at the house and WOW, the quality was amazing, the size of the image filled the side wall and there was no quality loss at all, we were extremely impressed with the quality of the image (the neighbours also told us a few days later that they too were impressed).  One of the great features was its built in ‘auto keystone’ effect, those of you who have had projectors may have played about with manual settings for this (often for quite some time!!), this projector does it itself, instantly, for those who dont know, the keystone effect is caused by attempting to project an image onto a surface at an angle, as with a projector not quite centred onto the screen it is projecting on. It is a distortion of the image dimensions, such as making a square look like a trapezoid, the shape of an architectural keystone, hence the name of the feature. In the typical case of a projector sitting on a table, and looking upwards to the screen, the image is larger at the top than on the bottom. 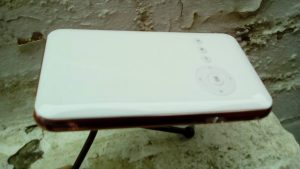 As well as being able to use the supplied remote or  your android phone (download the app) you can straight up use the buttons on the top of the projector too, this is handy if you are watching in bed and the remote or phone is too far, yet the projector is near!

Ok, so what are the bad points?

Well like EVERY GADGET you seem to buy today, the power adaptor lead wasnt long enough – but thats standard for everything isnt it ? (Including Mini NES controller leads – lol).   I guess the only other ‘bad point’ would be that you have to use the device to switch on projector mode if a device is plugged in – personally would like a switch or auto recognition of powered up device plugged in, but thats a personal choice for ease of use.

Would we recommend this product?

Without a doubt! This should be at the top of everyones want list, the device already has Kodi version designed for this unit (pre-installed), adding your add-ons is simple, and the device shys away from the cheap Chinese feel of its closest competitors, all in all the customer service from the team is fantastic, the delivery times were brilliant and looking at some of the DroidBox teams other devices they are going to SMASH 2017.

We are hoping to get our hands on the DroidBox Playon and load that baby up with some retro classics, and give that a good test and review (we have heard good things) – so watch this space!