Sega Mega-Tech conversion Phase 3 was a biggy! Its only going to get bigger and better from here on!

RE-DESIGNING THE CONTROLLER AND KEEPING IT REAL!

So as mentioned earlier I want to keep the cosmetic appearance as close to original as I can, but I also want to have systems such as the Megadrive (thats Genesis to my foreign friends!) – which required 6 buttons, so heres my concept…(see image above!)

Looks simple right? Simply add 6 more holes, 6 more buttons and jobs a ‘good-un’, but wait, what about the text, it says “Game Select” , well technically we dont actually need a “Game Select” button any more, but we could really do with a ‘BACK’ button for when zooming through the various system menus on Hyperspin (The front end menu software , customised to suit!- more on that later!).

This proved to be an absolute NIGHTMARE! If they were to make cars out of what they made these Sega panels out of, we could drive through walls without feeling a thing, talk about tough!! First off the panel graphics are OLD, ORIGINAL and looking faded, so its VERY IMPORTANT not too mess with them if I intend to keep them original, as you can see the first hole I drilled pulled the Vinyl away from the control panel, instantly meaning I would need new graphics……. 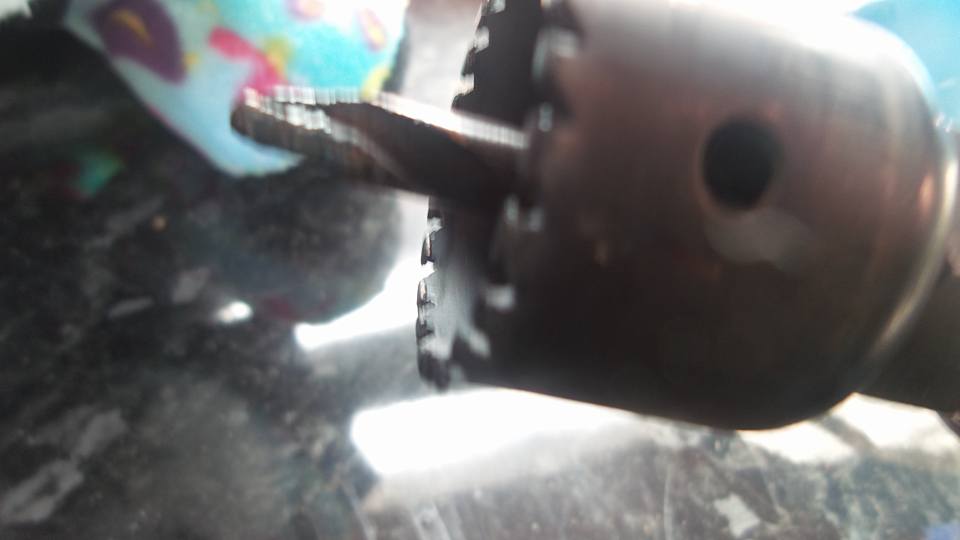 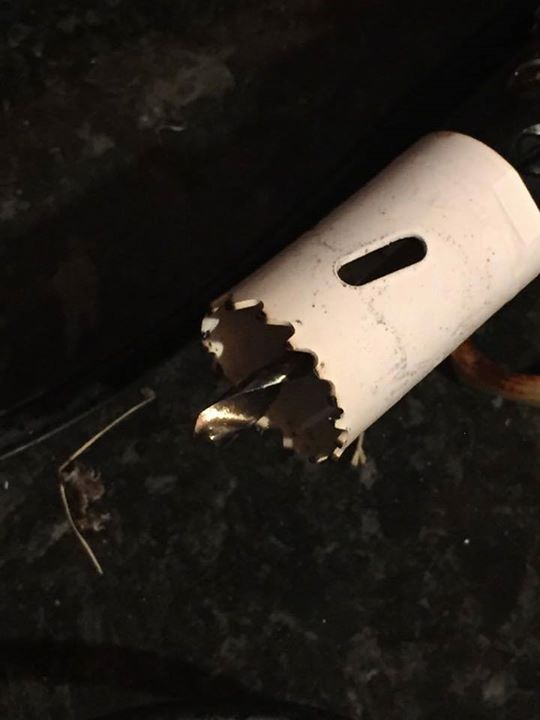 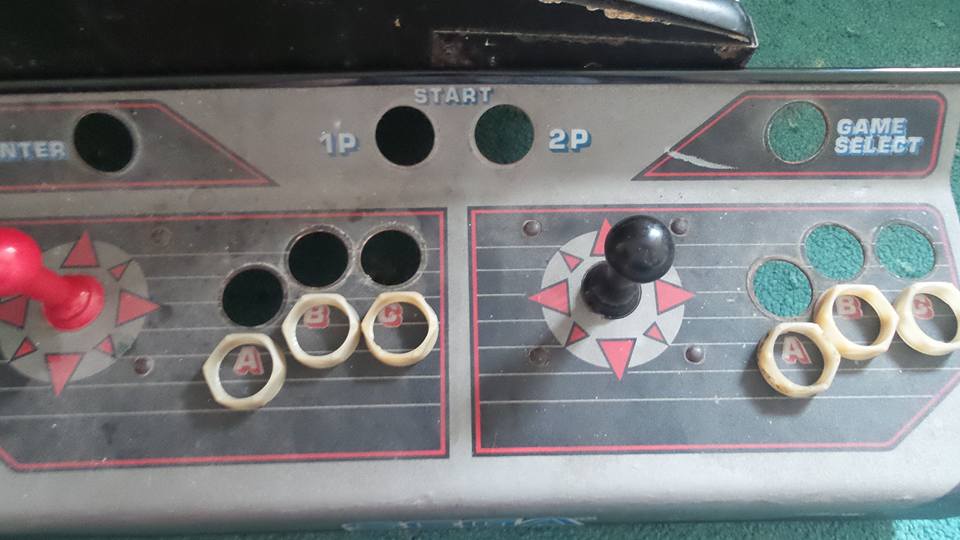 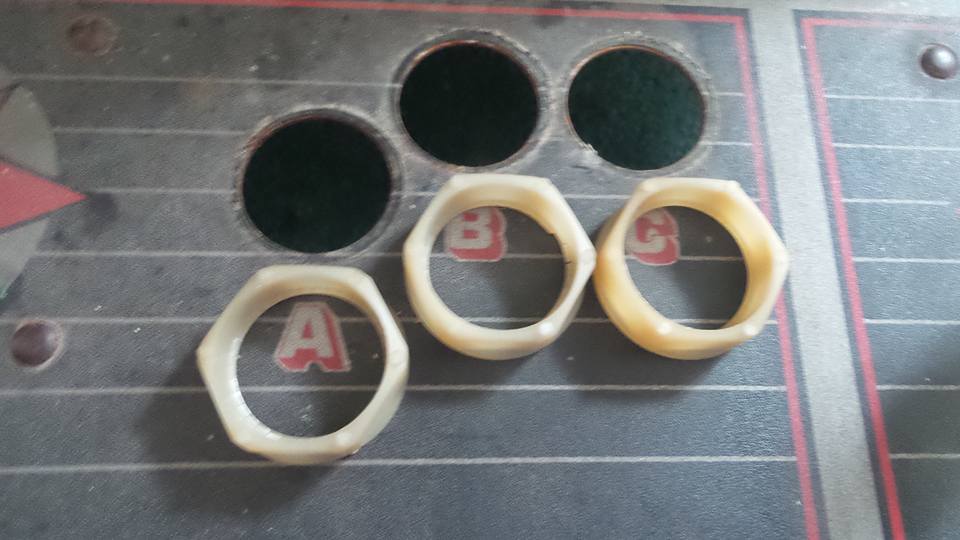 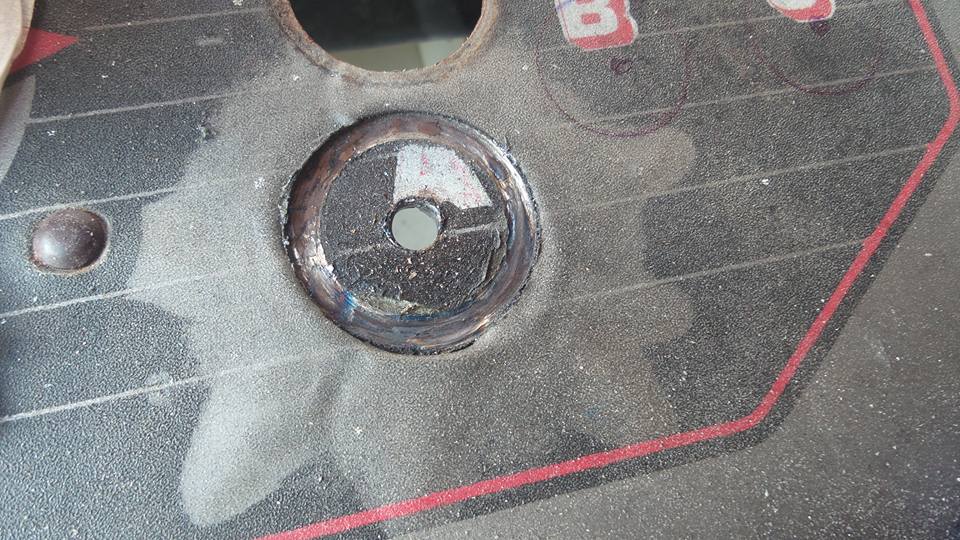 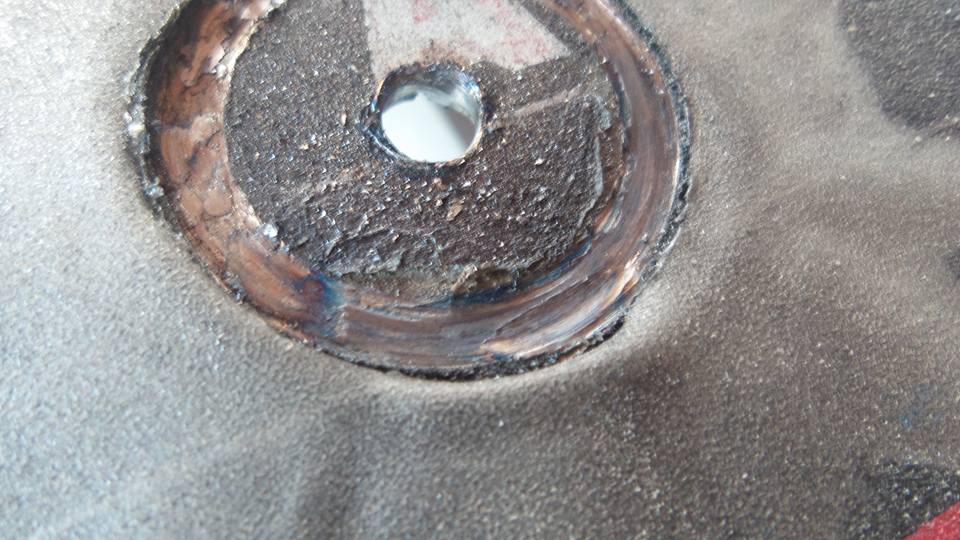 After going through a number of drill bits (And 3 trips to B and Q!) I finally managed to get the 6 extra holes into the panel. I had some help from my friend Andrew, who is a motor mechanic by trade, he insisted to take the now broken vinyl OFF the panel and get more remade, we did this and he took the panel home and cleaned away all the glue and original inking and took the panel back to a lovely smooth freshly drilled panel… 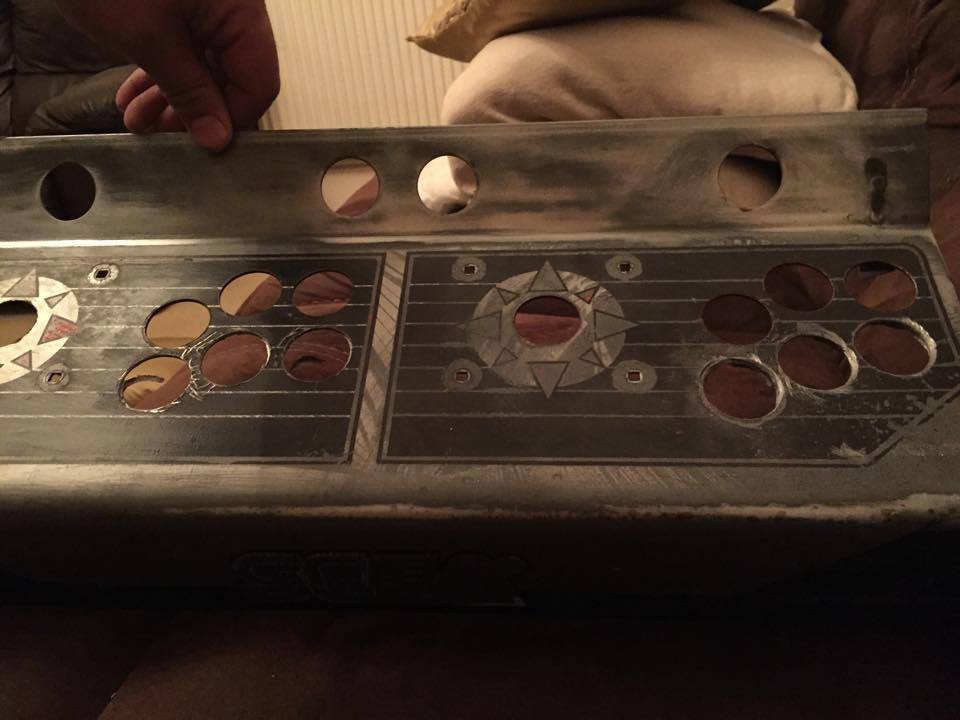 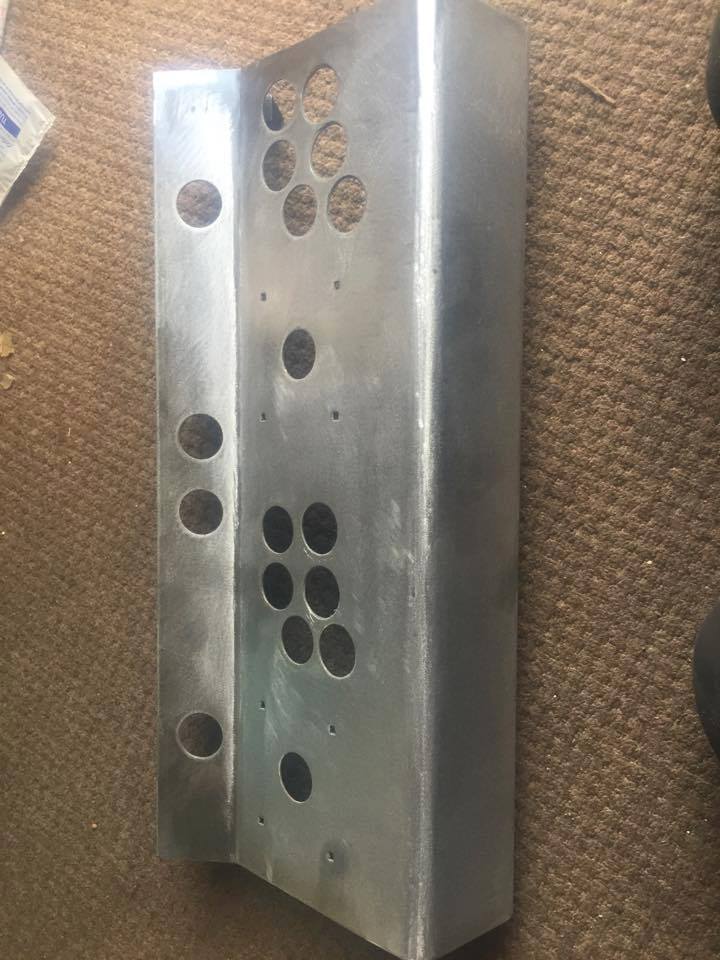 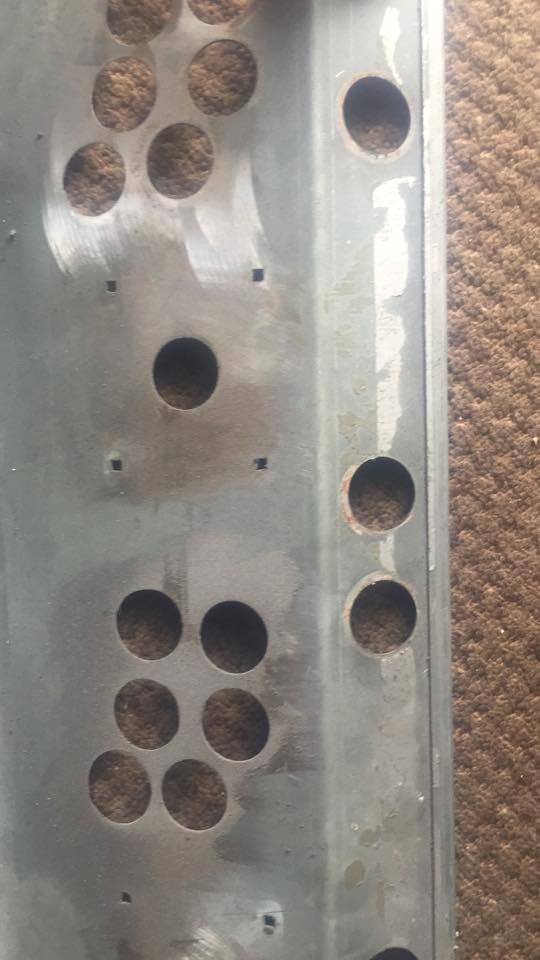 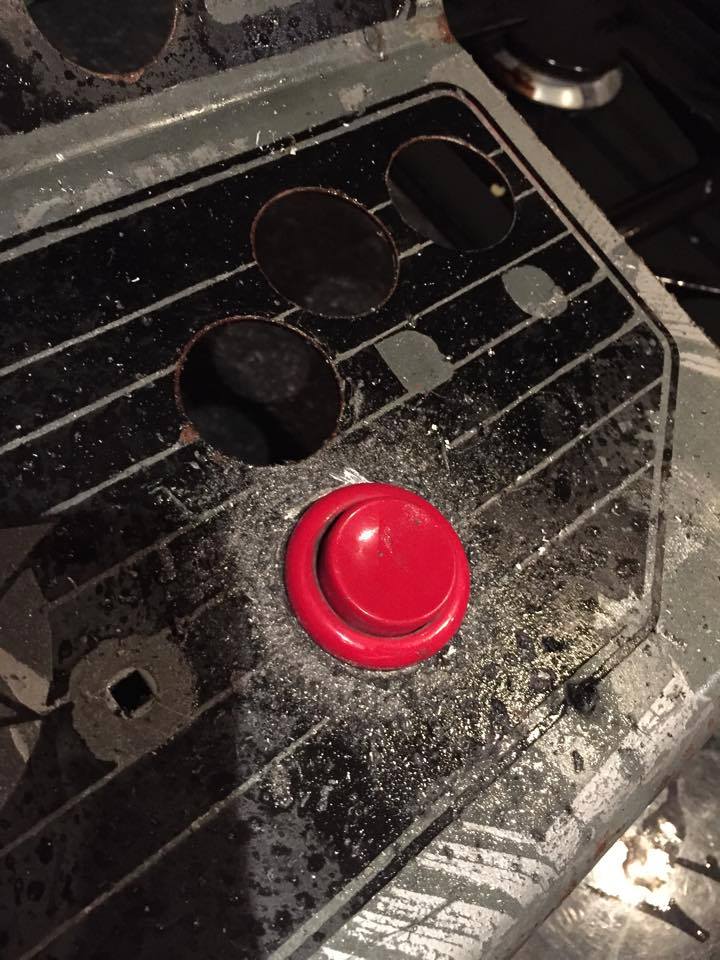 It was time to think about the designs, no-where on the internet could I find a design that was to actual scale of the original panel, I did stumble across a forum whereby someone had asked someone to make them one, they were then made one but there were lots of problems with the final fit and things not being where they should be – I decided AGAINST resurrecting the post (Which was a few years old!) and set about trying to do my own design (having never messed with CAD in my life…) but I did make a pretty picture of what I wanted! 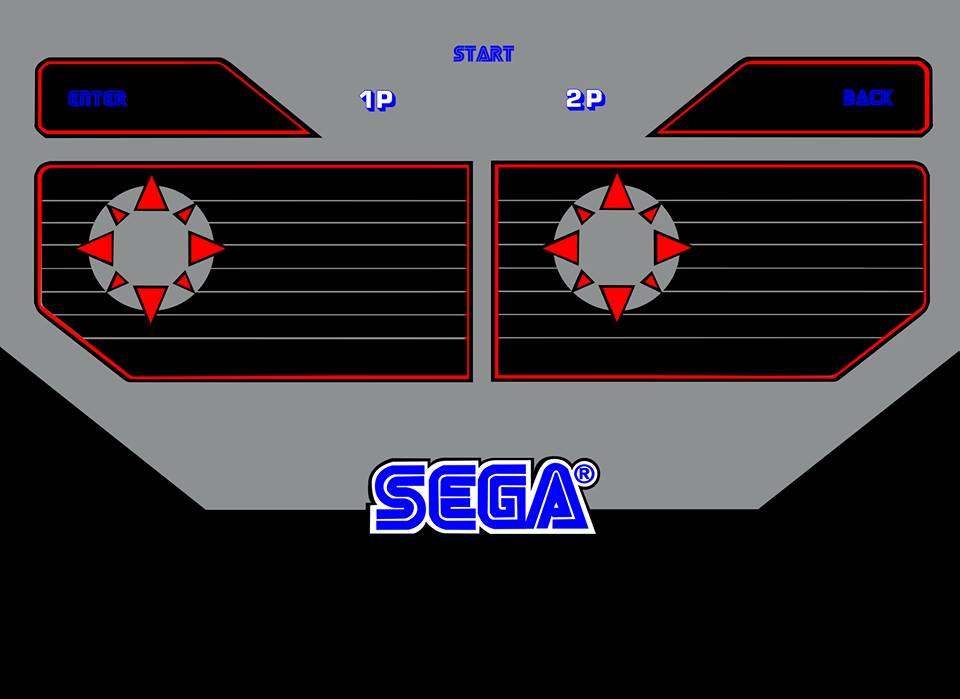 I spoke to some people from the ARCADE COLLECTIVE and decided that I was going to send my childish design (above) AND the panel to someone who could do a better job of constructing something for me on a hard based Vinyl, after messaging several FaceBook pages to no avail, I decided to go with a tried and trusted friend in Weston-super-Mare (Ralph) from PrintFactor who has a good reputation in our area, and who I originally used for some shop signage and internal artworks – choosing to go local I appreciate meant the costs would be higher (Even though I would save on postage) and also losing any passion a fellow retro arcade collector would share, but it did mean my son could drop the panel down and my image and I could get a ready to stick vinyl graphic back.

A week later, my inbox pinged and there was an email from Print Factor saying my panel and print were ready for collection , the bill £20 for the vinyl £30 for the artwork re-design, the artist had even found a better matching font to suit my artwork and requested we use that (Via email!) – I was stoked, although it was plus VAT meaning the total was £60 and had to fit myself, I have requested the designer send me the raw design, so that in the future I can make changes myself and just send print ready work to them (for these particular machines anyway!).

I fitted the artwork to the panel and it looked AWESOME! – NOTE: The buttons and joysticks are not yet screwed in on these pictures, just placed in, and everything fits LOVELY! 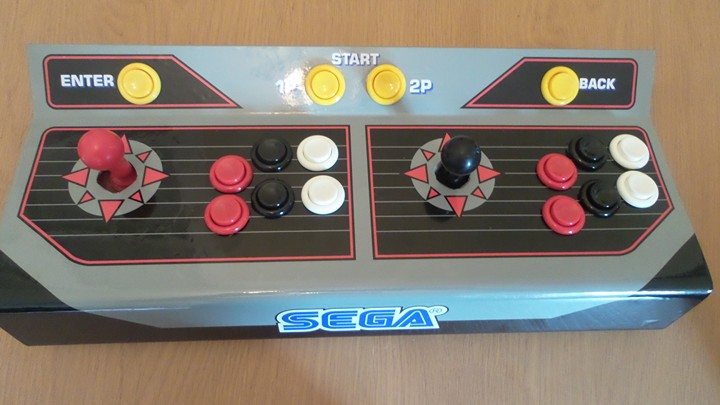 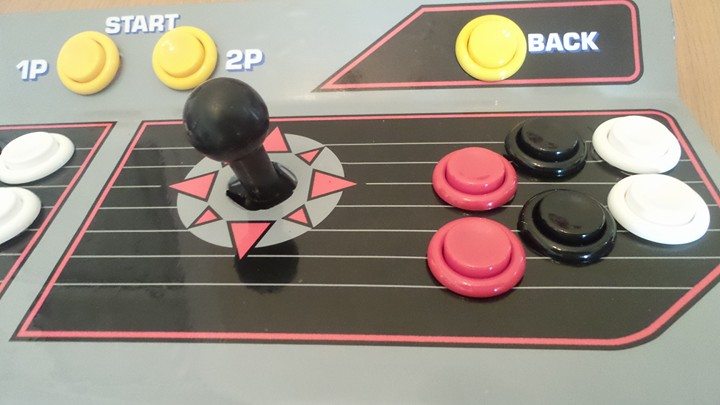 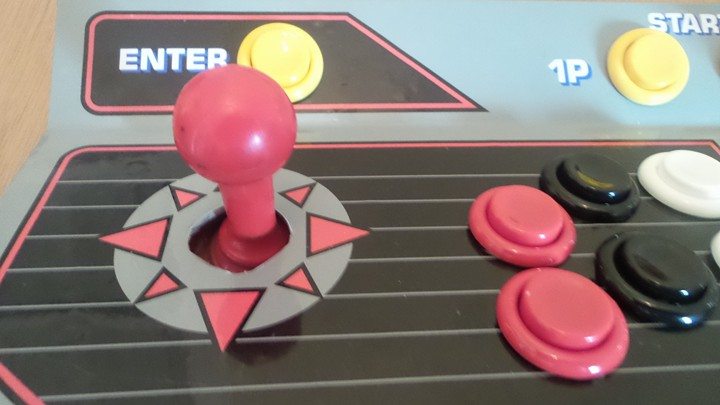 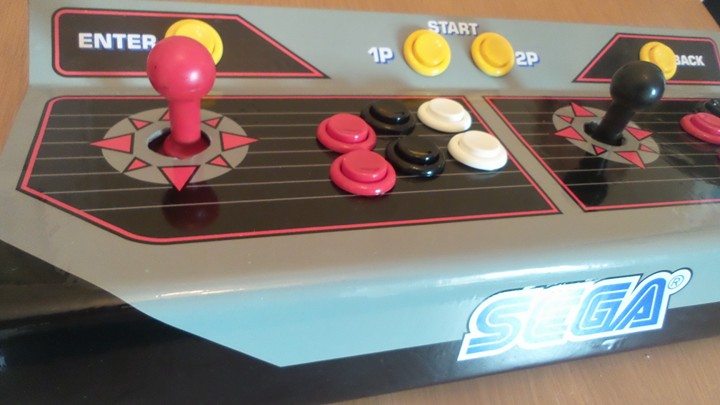 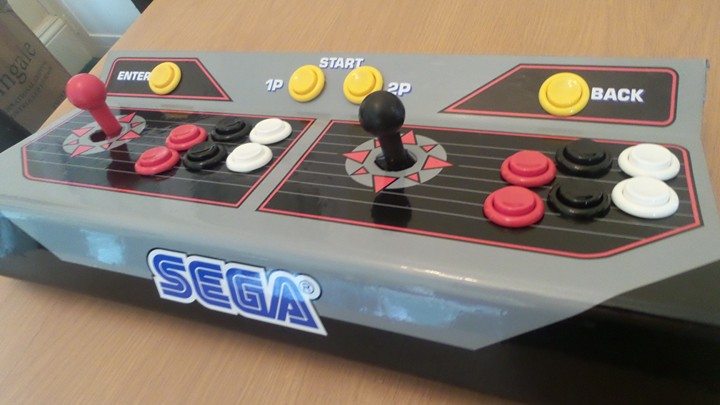 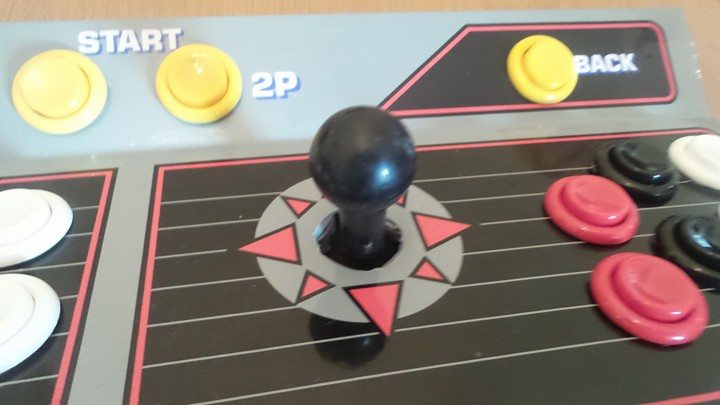 You may notice that all the buttons look new, this is because they ARE new, the joysticks are original but I replaced ALL the buttons on the controller because some did not work from the existing set-up, so decided to replace them all. You may also notice how sexy that BACK button looks , I am so impressed with this controller board right now.

I’ve since screwed all the buttons on tightly and the joysticks tightly (thanks again Andy for the loan of the long socket!) and am ready to wire up the controller (again) and start putting the machine back together ready to start programming the software…

Whilst I was awaiting the artwork for the controller I decided to set up my test PC with Hyperspin installed and work out how to get 2 monitors working nice (with something called  Hypermarquee), I wasted almost 19 hours , spitting, fighting , breaking and generally being useless and sucking and still never got anywhere, the idea being that as you select a game on the main menu, the top monitor (i.e. the marquee) show something relevant, such as a game case, or image or something.

Eventually I put the word out on some facebook groups that I sucked and was stuck, here my friend Nathan from Crims Arcades said he would Teamviewer to my test PC and have a little look, from memory this was like 1am here and quite early evening for him in the States. Nathan had a look around and insisted that I use the latest Hyperspin and Rocket Launcher and that I should move my test pc over to the same method as him, which we spent around 40 minutes doing, I only had the one system to configure (Master System) so life wasnt too bad, it was getting later and later and I decided to call it a night, Nathan asked if I minded him staying on and installing Hypermarquee for me, of course I didnt mind.  I awoke the next morning and it was all installed, he later informed me it took 5 minutes from when I ‘hit the hay’, so now my test pc has a up to date Hyperspin, new configured roms and emulators folder, Hypermarquee and Rocket Launcher

I spent the morning playing around and managed to configure the secondary monitor (i,e top screen) to display the system games ‘game covers’ when the game was highlighted, this was a step in the right direction.

So I am writing this now knowing it will be deleting when I create Phase 5 – but the plan at the moment is rebuild the control panel, fit in the cab, get the pc bolted into the cab, get everything glued, drilled and installed and get the cabinet functioning, keep any needed i/o stuff such as keyboard, mice and stuff, although long term these WONT be staying, this is ONLY during the programming periods.

Lots of work to do, hoping most of it will be done by the end of this weekend – watch this space …