Its HERE the official release of the PiPiggies FULLY LOADED 8TB Hyperspin Pack download – yes 8 TERRABYTES – But we got your back, instead of releasing it as an 8TB we , think, we got this shit locked down, we are going to release it in multiple packs.

Some of the Members may have already seen (and grabbed) this from our Official Members Area, whereby its more than likely to appear first in most cases. This will be available via the following downloads

We have a dedicated forum for “ALL THINGS PIPIGGIES 8TB HYPERSPIN DOWNLOAD” – from jumbled files, to booting and running, Please USE THE FORUM so we can all share and learn from others experiences.

With the release there are FOUR (4) Packs already available to download.

WHAT TO DO WITH THEM – EXTRACTION AND SETUP!

OK, So you need to get this bad boy installed on your D: Drive, IT MUST BE THE D: DRIVE – You may need to change the drive letters in order to get this to work.  You will need WINRAR to extract the archives.

NOTE: For adding all the future packs it is simply a case of re-doing step 4

So in the root of the D:\ Drive you have a folder called Arcade and inside that should look like this …. 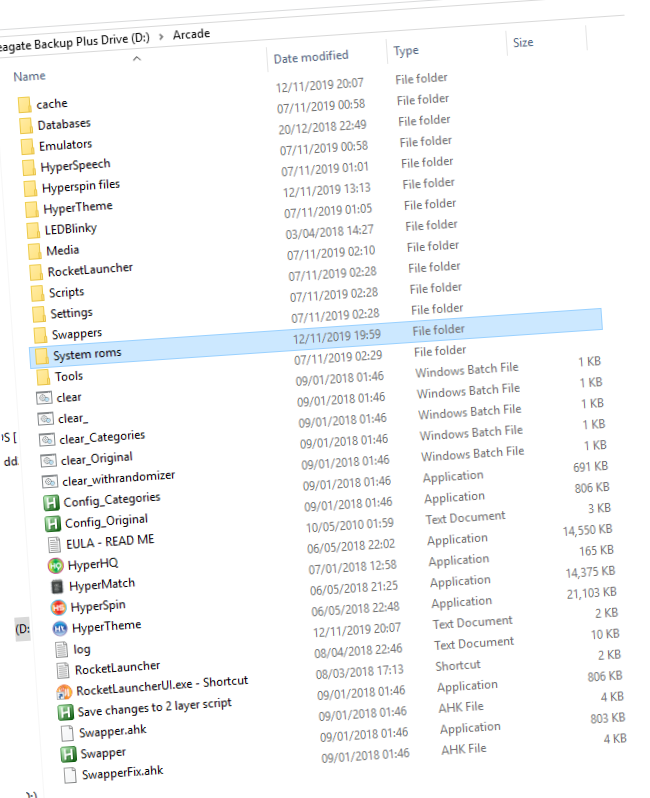 NOTE1- Before we start, its worth pointing out that this build is pre-configured to a WIRED XBOX 360 CONTROLLER

and will JUST WORK, otherwise you may need to configure your controller.

NOTE2– Its also worth noting that when you first fire up Hyperspin, you may get some shit on your Anti-Virus pop up – this is all safe and what you are experiencing is FALSE POSITIVES – you may have also got these when extracting the above – you need to ensure your virus software has not moved the files into a vault as this means they will no longer work, you need to mark them as safe, and allow them to run.

NOTE3– Its also worth noting that Windows 10 did an update that stopped Hyperspin from working, so if nothing happens then you will need to download THIS (if you are a member of the Hyperspin Forums) or THIS (if not)  and overwrite the files inside D:\Arcade\

LETS FIRE THIS BABY UP AND SEE WHAT YOU CAN AND CANT DO!

Now you can take a look around your Hyperspin Front End, remember you only have a few games (G.O.G. and BIG FISH GAMES) and they are NOWHERE NEAR Perfect (more on that next)…. For shits and giggles fire up 1insane in the GOG Games Folder, its a great game!

ARE YOU TELLING ME THE FIRST ROMS PACK ADDON IS CRAP?

In a nutshell, YES, this was intentional, lets be fair NO-ONE plays , Big Fish or G.O.G. Games (much!?) – so heres what we have done, over on the OFFICIAL HELP FORUM We have created special sections for each download pack, the “theory” behind this is that each one can be discussed, ripped apart, edited, fixed, updated, upgraded and so on, by the AWESOME COMMUNITY that is you guys, so we can tell you the GOG and BIG FISH are incomplete and dont match the wheel, just to get you started – dont worry each pack is not going to be so shabby, but we want you to go get involved and see HOW EASY it is, someone will release a GOG FIX and a BIG FISH FIX and you’ll just be over the moon… So to help you out, heres the LINK TO THE ROMS PACK TOPIC. Good Luck 😀

LOTS MORE TO COME – WATCH THIS SPACE – PLUS YOUTUBE/FACEBOOK !

Harrison Yaks – Mini Consoles – The Good, The Bad, The Over Priced!?